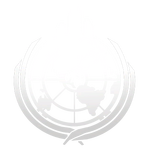 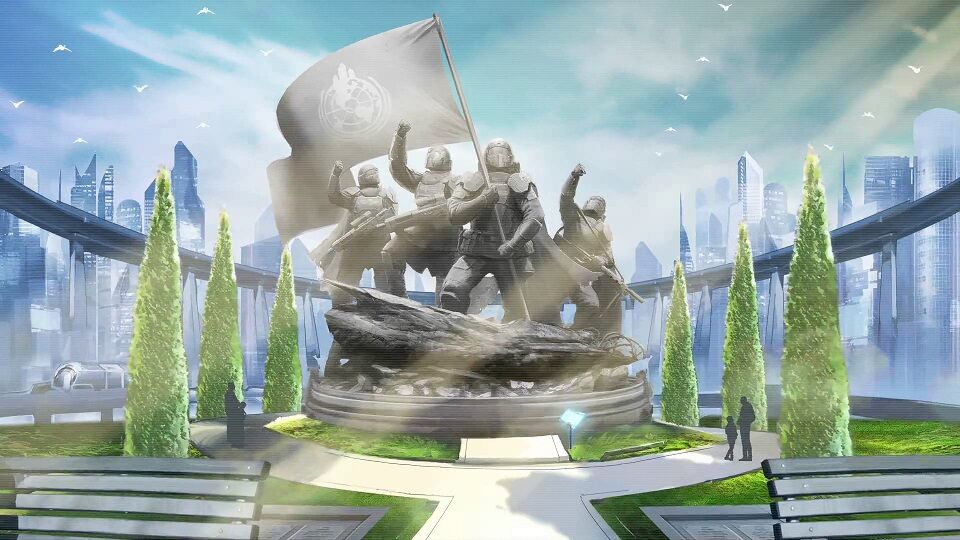 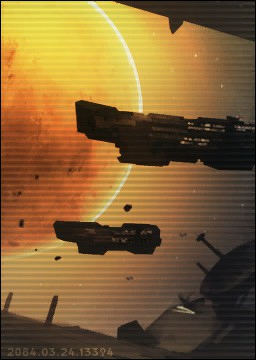 When mankind ventured into space, we were curious to see if anything loomed behind those stars; unfortunately, we were right. The initial contacts were peaceful, but soon the people of Super Earth realized the potential danger of communicating with alien species, and before we knew it, they started our first intergalactic war.

For 40 years, the war has raged on, a conflict whereby three hostile alien species are hell-bent on a single goal: the total annihilation of the human species. Luckily, the fighting spirit of man has not decayed since the last great war on Earth. We are now stronger than ever; man, woman and child alike are encouraged to try their strengths in the ultimate test - to have the courage to defend Super Earth." - Encyclopedia Description 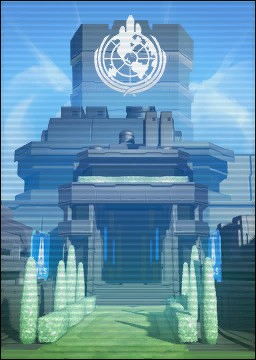 "Mankind has improved upon the old concept of Democracy. Utilizing computer aided voting software, citizens are asked to answer several questions, and the outcome of their vote is decided upon by the computer. This removes the uncertainty that existed in the old systems where voters didn't understand fully what they were voting for, giving us Managed Democracy." - Encyclopedia Description

Citizens of the federation of Super Earth use automated voting software; they answer a few questions on the Galactic Wide Web (GWW) and the computer votes for them based on that outcome. The GWW is a network of interlinked communication devices that transmit data using quantum communication, "very elementary stuff" according to the ship's C.O.

It is made very clear at several points in the game itself and in some of its DLC's descriptions that the government of Super Earth has a history of brutally suppressing dissidents:

The above means it's likely that (a portion of) early Super Earth riot police were fully-trained military assassination and reconnaisance specialists before Super Earth unified -- and that the Ministry of Defence also either acted as a police force or supplemented it.

Fun fact: the TOX-13 Avenger was "developed by Dr. Junko under the 2079 act of self-defence research and has been tested extensively on live targets". The DLC description for the Hazard Ops Pack also notes the following: "Sometimes shunned by fellow Helldivers for their use of inhumane warfare, many a Helldiver is happy to have them on the mission when it comes down to life or death. It's not like the enemy is Human after all." 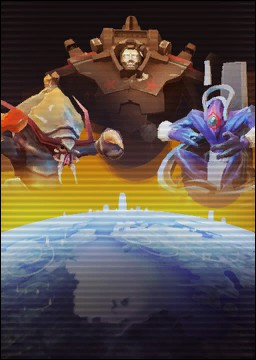 "Our galaxy, the Milky Way, is inhabited by more species than was previously believed, and it turns out, most of them are, in one way or another--hostile.

The Super Earth military is fighting to keep back the tide of enemies that besiege us from all fronts. The elite Helldivers go both beyond the front and behind our own lines to support you and our troops." - Encyclopedia Description

The game consists of an endless series of wars against three factions: the Bugs, Cyborgs and The Illuminate. As soon as one war is won (or lost), another one immediately starts. The admiral on the ship's bridge pretty much admits to this, stating: "[...] of course, when we have won this war, there will be another to fight, and after that - another! After that? Another! I could go on, but you get my point - let us focus on this war."

"A couple of years ago, Cyborg terrorists detonated a massive bomb in one of the city-planets killing thousands of civilians – now is our time to get back at them!" - Ship's C.O.

Super Earth's usual "case for war" against the Cyborg Nation is: a cybernetically augmented human, in an act of terrorism, detonates explosives in the center of District 48 of Super Earth, killing 8 citizens. Those who doubt the official story run the risk of being labeled "cyborg sympathizers". Note that the initial explosion may have killed thousands, but that every war with the Cyborgs in the game's Galactic Campaign is caused by a much, much smaller-scale terrorist attack.

Cyberstan, the Cyborg Nation's homeworld, is a barren snow-covered wasteland on the galactic fringe. Whenever it is conquered by Super Earth, the Cyborgs are then "democratized" by force, coerced into the voting booths by the threat of losing their civil rights. Super Earth's Army Tactical Command invariably stations troops on the planet for a period of 5 years to "keep the peace and run government positions", after which period the Cyborgs' culture is supposed to have transitioned to a "fully democratic" one (by Super Earth standards). Meanwhile, the Super Earth Construction Company (SECC), a government contractor, takes over the massive forges and industrial complexes of Cyberstan. Eventually, inevitably, another bombing starts this whole cycle anew.

Cyborgs are often depicted by the Super Earth government as socialists; they're not helping their case with their choice of logo: a red star. Constantly shouting battle cries and muttering to themselves in a variety of languages, Cyborg troops gleefully deride the Helldivers and Super Earth as (among other things) "plutarch scum".

Rumors about the Cyborgs circulate among the ship's crew members; some (or all) of these rumors could be the result of Super Earth propaganda. According to one of the Privates, "a crazy scientist started replacing body parts on people she had kidnapped." The threat of being taken away by Cyborgs for these "perverse modifications" is apparently used as a boogeyman.

"The federation has decided that the Bug threat is becoming too great. Senator John W. Killjoy declared "The Bugs have been a plague in this galaxy for far too long, they must now be eradicated before they spread to other worlds"." - Bug War Announcement

The Bugs are a sentient extraterrestrial species, their form reminiscent of very large Earth insects, arachnids or crustaceans. As far as the scientists of Super Earth know, their homeworld is Kepler Prime, a desert planet on the eastern fringe of the galaxy.

Bugs are known to generate "vast quantities" of oil during decomposition, similar to how Earth's pre-human lifeforms provide us with fossil fuel sources. During the announcement of each new war against the Bugs, mention is made of "lost oil pumps" that the Helldiver Corps is to reactivate. These oil pumps (which, as shown in the game's intro, prominently feature a Helldiver skull emblem over an oil drop) are also found on Kepler Prime. The implications of this are that the Helldiver Corps is responsible for at least part of the resource-gathering process, and that they have been to Kepler Prime before – possibly triggering the Bugs to attack Super Earth.

Super Earth propaganda depicts the Bugs as a threat that will infest the entire galaxy if not suppressed. However, when the war against the Bugs is won, the tune is quickly changed; suddenly, the Bugs are a rare, valuable species that is a potentially unlimited supply of fossil fuel resources for Super Earth and eliminating them "just wouldn't be right from a moral perspective". Following this, a certain scientist called Dr. Henk Ploeg then works on a way to safely breed the Bugs in a controlled manner.

As there is always a new war after the current one, and a new one after that, and so on, we can infer that this "safe breeding" of Bugs tends not to work out too well.

"We have solid evidence that the Illuminate have an extremely powerful nano-fusion device that can destroy an entire planet. Could you imagine the cry of millions if even one of these devices are used?" - Ship's C.O.

The Illuminate, or Sq'uith as they call themselves, are an advanced extragalactic race which for millennia has had settlements in the south quadrant of the galaxy. If Super Earth propaganda is to be believed, the aliens consider themselves enlightened beings (hence the name – but why would they call themselves the Sq'uith then?). Originating from the ocean, the Illuminate species makes use of bio-electronics and nano-powered devices. According to the ship's science officer, they still sting slightly when touched because of their vestigial electrolyte glands: "[The Illuminate] went down the path of electricity in the same way we did from rocks to bullets".

The blue-skinned species was first encountered in the late 21st century, when Illuminate recon craft were frequently sighted. These sightings were dismissed as folklore back then, but after a time, the Illuminate came forward with a peace offering. This was declined by the government of Super Earth when it was found out that the mollusc-like aliens had "large quantities of world-destroying devices", nicknamed "obliterator bombs" by Super Earth. This was deemed sufficient cause for a pre-emptive strike, aimed at removing their presence from the galaxy and obtaining their highly-advanced technology. To quote senator John W. Killjoy: "The statement sends a clear message to all would-be threats to Super Earth; if they have more advanced technology than us, be prepared to pay the price".

After succesfully defending against a region capital assault from the Illuminate, the ship's admiral reminds the player that there is solid evidence that the Illuminate were planning to use a planet-destroying device. However, lost region capitals can be recaptured from the Illuminate. Considering that Super Earth is destroyed and then moved to a new planet whenever the war is lost, the capitals could indeed have been destroyed and a new one with the same name set up; it could also simply mean that the Illuminate are not as willing to use their weapons of planetary destruction as the citizens of Super Earth are led to believe.

Super Earth deals with those who take a more tolerant stance towards the Sq'uith (describing the aliens as "ancient and wise") by means of public executions. The Helldivers are sent in to disarm or preferably capture any WMDs and other potentially useful technologies that eclipse what Super Earth has at its disposal. These likely include the SH-20 Shield Generator Pack and weaponized Arc technology used in the AC-3 Arc Thrower and AC-5 Arc Shotgun.

Upon their defeat, Super Earth forces the Illuminate to sign a treaty which disallows them from creating an armed forces branch and requires them to turn over all of their weapons technology to Super Earth. According to Dr. Henk Ploeg, PhD, "the amount of technology we are going to receive will accelerate our technology tenfold and allow us to create peacekeeping devices that have the power to destroy entire planets!"