This page is a work in progress and will be updated in the near future. 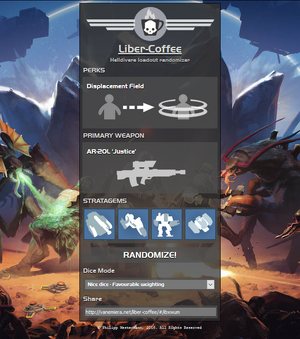 Liber-Coffee is a Helldivers loadout randomizer created by Vanemiera in 2016. It serves up a random combination of a Perk, primary weapon and four Stratagems, making it a good way for experienced HELLDIVERSTM players to increase the challenge of completing missions, or for newer recruits to experiment with equipment they would otherwise not have tried out.

The "Randomize" button will generate a loadout according to the chosen "dice mode". It is also possible to re-roll each Perk, primary weapon or Stratagem by clicking its icon. All items can appear in any mode, although the weighting skews how often they will appear.

Loadouts can then be shared by the text link that is automatically generated at the bottom of the page.

The codes are built up as follows:
http://vanemiera.net/liber-coffee/#/123456

It is possible to select one of five "dice mode" for the randomization process:

Below is a table of the weightings, which were obtained from the Liber-Coffee GitHub source on July 21st, 2018. The table also displays which letter in the code represents which item, so it is possible to generate a loadout code without having to click on the icons multiple times.