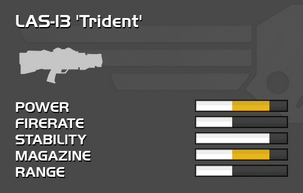 "This shotgun-like weapon is a further development on the laser carbine technology, allowing for a virtually ammunition independent weapon. Suitable for when you want an easier time hitting your target."
- Armory Description

The LAS-13 Trident was given for free to all players regardless of rank on 3rd March 2016 to celebrate the one year anniversary of HELLDIVERS' release. It is unlocked by default for new recruits so long as the latest version of the game is used.