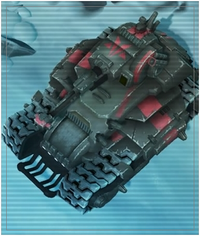 Cyborgs from time to time deploy Infantry Fighting Vehicles to carry Grotesques into battle, these war machines are equipped with a powerful cannon and extremely tough armor. The armor is tough enough to shake off everything but dedicated anti-tank weapons, and even then, it may be possible for them to survive a direct hit from certain angles.