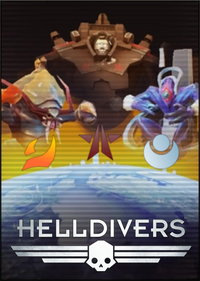 The people of Super Earth are currently engaged in a galaxy-wide existential struggle against three enemy factions, namely Bugs, the Illuminate and Cyborgs. These enemies of humanity all seek to extend their galactic territory through military conquest and Helldiver troops must fight to bring an end to their rapacious and warmongering empires.

Each enemy faction is comprised of between 10 and 12 different enemy types that fulfill certain distinct military roles:

A belligerent race of sentient insectoid creatures, desperately fighting for more territory to house their innumerable horde. The Bug homeworld is the desert planet of Kepler Prime. Enemy types:

An ancient and technologically advanced alien civilization threatening Super Earth with its formidable weapons of mass destruction. The Illuminate homeworld is the forest planet of Squ'lath Shrine. Enemy types:

A separatist movement of former human beings whose obsession with the cybernetic augmentation of their own bodies led to their violent rebellion from Super Earth. The Cyborg homeworld is a snow-covered planet known as Cyberstan. Enemy types: