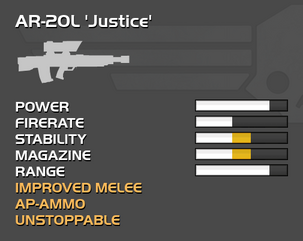 "This combat rifle was created to aid Helldivers in battle when they need a higher caliber rifle. The magazine carries fewer rounds than the Liberator assault rifle but each round is of a higher caliber, effective against medium armored targets."
- Armory Description